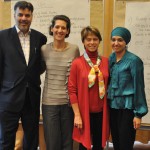 On the 23rd March to the 25th March 2012 The European Foundation for Democracy facilitated a networking conference in Berlin at the NH Berlin Friedrichstrasse Hotel. The purpose of this conference was to empower activists and leaders from countries who are working with Muslim communities in Europe to counter radical extremists and advocate liberal-democratic principles of individual freedom and pluralism. Farzana Kosar, member of CSCA also participated in this conference and spoke of the social and community cohesion work the CSCA is involved in, which helps Muslims within British society reconsile their religious and national identity in a way that repsects religious freedom and combats radicalization.

The conference was attended by over 20 participants from different European countries including; such notable individuals as Bakary Sambe. Bakary is a French-Senegalese Muslim scholar who conducts research on the spread of Wahabism in Africa and more generally on movements and ideologies within Islam and their compatibility with democratic values and principles. He is a member of ASMEA (The Association for the Study of the Middle East and Africa). He is fluent in French, English and Arabic. Bakary spoke about the importance of countering radical narratives and enhancing the voice of many mainstream Muslims throughout the world. He also recommends that schools and college should increase socialisation and allow open debate. Many children have adopted views from parents and thus may have misleading information. Many of these children have never had such discussions and some are on the border line of becoming radicalised.

According to EFD’S Executive Director, Roberta Bonazzi factors contributing to radicalisation are manifold, complex and often not completely understood. 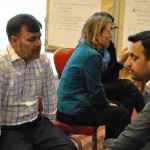 The conference was also attended by Maqsood Ahmed OBE, senior faith advisor for Department for Central and Local Government. He spoke about the importance of empowering the Muslim youths from low social and economic back grounds to help them achieve and have a better start in life and not become exposed to extremist ideologies. Radical preachers focus on Muslim youths who are not doing well and blame the system in the country.

The conference included many round the table discussions between the participants seeking to learn from each other’s knowledge, experience and problems / issues facing them in their respective countries. This has opened opportunities for collaborations on projects, seminar or activities between countries. 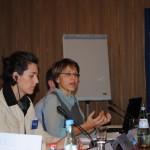 Other issues mentioned by Farzana Kosar was how the CSCA deals with issues of extremism, including violent offenders, through its affiliate organisations in the UK and at its central base in London, Feltham. She further spoke about the importance of interfaith social action and about the recent programme ‘A year in a service’ celebrating different faiths the CSCA is a part of and is a supporting organisation. Farzana also spoke about the CSCA’s belief that interfaith action will help build capacity of the community to take practical steps to reject division amongst one another and feel part of a wider united British Society.