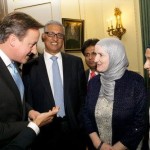 CSCA was invited to Number 10 Downing Street by Prime Minister David Cameron to take part in a reception to celebrate Eid Al Adha. Representing the CSCA and attending on their behalf was Farzana Kosar the General Secretary for the CSCA.

CSCA has dedicated a great deal of time working with Central Government on a range of community programs in relation to Social and Community Cohesion.

The PM David Cameron thanked all guests for attending the reception and wished everybody Eid al Adha Mubarak. The PM David Cameron spoke about the huge positive contribution British Muslims make to our country. He praised the Big Iftaar concept, and went on to say, “I thought this was a brilliant idea, to invite in the community from all walks of life, all religions or no religions, to come and see what an Iftar is all about. It was a fantastic event, and I think the Big Iftar is an absolutely brilliant idea – to open up your faith, your religion, your community centre, your mosque to others, to let them show what a contribution Islam makes to Britain”.

The PM David Cameron added, that the “Woolwich incident is in no way representative of Muslim faith. Terrorism and murder cannot be branded as Islamic.” Here is a link to the Prime Minister’s speech from the evening: https://www.gov.uk/government/speeches/david-camerons-2013-eid-al-adha-reception-speech