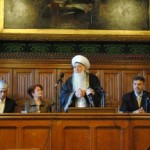 The Rt Hon Hazel Blears MP for Salford & Eccles in conjunction with the Centre for Spirituality and Cultural Advancement (CSCA) hosted an event celebrating the life of Prophet Muhammad (S) at the House of Commons on the 21st January 2013.

There were over 100 people of all walks of life who attended the event. The Rt Hon Hazel Blears mentioned in her speech that Islam is religion of peace and has always been so, there are few criminals who commit crime in the name of most noble faith of Islam and try to tarnish the reputation of the majority of the peace and loving community. She added that the Sufi form of Islam in particular Shaykh Kabbani has been a fundamental leader and reason to project the clear message of Islam and has been very actively doing so throughout the World. She appreciated his work in the UK and excited about the new centre in Feltham.

Shaykh Kabbani spoke about the importance of love, Prophet Muhammad (s) emphasised the need for love for the community, to love all people regardless of faith and no faith. Islam is a religion of peace and it is important to live a peaceful way of live, thus it is essential in order to bring people together and leave peacefully. It is imperative to focus on building bridges between people of different communities and reducing communal segregation that may cause hostility with one another.[/div]
[nggallery id=9]